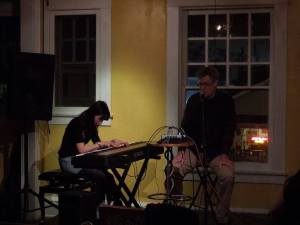 “A melody is sung, out of which overtones rise, forming another melody which soars way above the fundamental melody, seemingly completely separated from it.”

Stuart Hinds’ amazing ability to create two discrete melodies at the same time makes him unique among overtone singers. His original compositions are a “harmonious blend of Eastern and Western, ancient and modern, sensuous and cerebral” – music that appeals to a wide range of tastes.

Every musical note is actually a composite sound consisting of a fundamental, which is the pitch we perceive, plus a number of additional pure sounds called harmonics or overtones. These overtones are not normally heard individually, but the greater or lesser prominence of some of the overtones over the others determines the timbre or tone color of the note. The overtones make the sound of each voice or instrument unique and identifiable, and allow us to distinguish the sounds of the various musical instruments and also to recognize voices.

Overtone singing refers to techniques which allow a singer to isolate particular partials of the natural harmonic series of a sung fundamental pitch. By modulating the shape of the vocal tract, two or more pitches can be produced simultaneously, a fundamental and one or more of its natural harmonics.

Stuart Hinds is developing a unique style of overtone singing which is truly contrapuntal. That is, he sings in two equal “voices” simultaneously – the fundamental voice and the overtone voice. Both voices move independently in the same way they would if performed by two separate musicians. In one of his works, Renaissance Man, Hinds actually sings in strict canon with himself! – the overtone voice following the fundamental voice at four beats separation and transposed up a fifth.